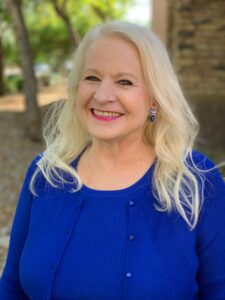 Karen E. Peterson, Ph.D. is a Licensed Psychologist who has been in practice for 28 years.  She works with children, adolescents, young adults, and adults.   She attained her Master’s and Doctoral degrees in Counseling Psychology from the Ohio State University, where she conducted research on anxiety/motivation and therapeutic humor, and began her work in the burgeoning epidemic of eating disorders on college campuses for both her predoctoral internship (1985-86, Ohio State University Counseling and Consultation Service) and her postdoctoral internship (1987-88, Ohio Wesleyan Counseling and Advising Center).  She has been board licensed in the state of Arizona since 2005.  She also is licensed as a psychologist in Massachusetts (1997), Florida (1989), and Ohio (1988)—and she is certainly not thinking about EVER moving again.

During her training at Ohio State University, Dr. Peterson served first as an instructor and then as the Director of the Psychology for Personal Effectiveness, a program that served as a basic survival course for first-year college students, with a focus on study skills, time management, test anxiety, writing anxiety, and speech anxiety.  It was during this time that she began to notice the strong connections among anxiety, AD/HD, and disordered eating.

In her private practice in Miami, Florida, Dr. Karen continued her work with eating disorders, which was a presenting concern for the majority of her clients.  She also facilitated a Compulsive Eating Discussion Group (a psychoeducational “open” group) and a Compulsive Eating Support Group (a psychotherapeutic “closed” group) for the Miami Women’s Health Center at North Shore Hospital.

During her time in Massachusetts, Dr. Karen was a staff psychologist at the Hallowell Center for the Treatment of Anxiety and Related Disorders, a specialty clinic where the majority of her clients were struggling with AD/HD and/or Learning Disabilities, along with anxiety, depression, and disordered eating patterns.

After she arrived in Arizona, Dr. Karen worked for six years as a Consultation/Liaison Psychologist at Phoenix Children’s Hospital, an experience which expanded her interest in atypical eating disorders— such as Avoidant/Restrictive Food Intake Disorder or Rumination Disorder—as well as eating disorders that are complicated by co-existing medical conditions (such as diabetes, colitis, complex pain) or by autoimmune disorders (such as celiac disease, autoimmune encephalopathy, multiple sclerosis, fibromyalgia).

Dr. Karen is also interested in working with writers, artists, filmmakers, and photographers who are coping with disordered eating patterns.  As a former college English teacher and a writer herself (she holds an M.A. in English and is the author of four books), she enjoys helping clients who are seeking to overcome their reliance on food to quell anxiety and procrastination—so they can finally feel free to explore their creativity, express themselves, and achieve their ultimate dreams.

One of her favorite quotes is by the late Kurt Vonnegut:  “Wake up—wake up!  Free will! Free will!”  It’s not exactly rocket science—and we all know it’s never quite that simple—but a little humor sometimes goes a long way.  On a more realistic note, Dr. Karen’s philosophy is perhaps better summed up in a quotation by one of her other favorite authors, the late Maya Angelou:  “My mission in life is not merely to survive, but to thrive; and to do so with some passion, some compassion, some humor, and some style.”SaveSave